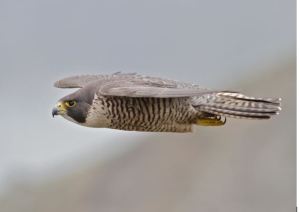 This talk will provide an overview of the peregrine falcon’s saga, from the pre-DDT era through its drastic world-wide population crash to its present full recovery and beyond. We will touch on the cadre of researchers and citizen scientists who uncovered the DDT story as well as the efforts to save the peregrine through captive breeding and reintroduction. In addition to illustrating the breeding chronology of peregrines, we will also discuss how its biology has allowed it to inhabit both the natural and the “built” environment. While the talk will focus on California, it will present a global perspective.

If you wish to attend, please respond no later than noon on Friday, March 26th , to the Friends of SPVP email: friendsofsanpedrovalley@gmail.com About the speaker:
In addition to his duties as the Wildlife Program Manager with the East Bay Regional Park District (EBRPD), Doug is an Adjunct Professor of Biology at California State University, Sacramento, and a Research Associate in the Department of Mammalogy and Ornithology at the California Academy of Sciences. Doug holds a B.A. in Zoology from Humboldt State University, a “Diplom-Biologie” from the University of Muenster, Germany, and Ph.D. in Zoology from U.C. Berkeley, where he studied ornithology and systematic biology under Ned Johnson in the Museum of Vertebrate Zoology. He conducted Post-doctoral research on white-crowned sparrow song evolution and peregrine falcon genetics at the California Academy of Sciences and worked as a Waterbird Biologist for the San Francisco Bay Bird Observatory. His research interests range from avian systematics and population genetics to conservation biology. He has been engaged in long-term studies of golden eagles, prairie falcons and other raptors in California with an emphasis on assessing impacts from anthropogenic activities, especially renewable energy development, and finding ways to lessen those impacts. Doug is past president of the San Francisco Bay Chapter of the Wildlife Society and the Western Section of the Wildlife Society.