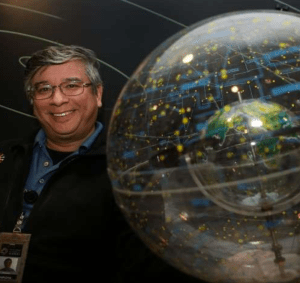 What’s up in the evening sky that can be seen with the unaided eye or with just a pair of binoculars? Amateur astronomer Bing Quock will give us a tour of the heavens, including seasonal constellations, notable deep-sky objects, & a sneak peek at a few upcoming events, including meteor showers, interesting configurations of the Moon & planets, and a rare transit of Mercury across the Sun that won’t be seen again until 2032. Interested in purchasing a telescope for yourself or as a gift? What are some recommendations and affordable resources? We’ll explore the heavenly hobby of stargazing; be there on Saturday, Oct 26, at 4pm.

Bing Quock is a long-time amateur astronomer, having been bitten by the astro-bug while growing up during the height of the Space Race. Drawn away (but not completely) from dinosaurs to the science of the stars by the writings of Patrick Moore & Carl Sagan, he parlayed his childhood interest into a career, having since taught astronomy courses at both the informal & college levels. He is currently Assistant Director of Morrison Planetarium at the Cal Academy of Sciences. He’s a frequent interviewee on local media, explaining astronomical events, & writes daily sky watching tips that appear in over 30 newspapers across the nation.