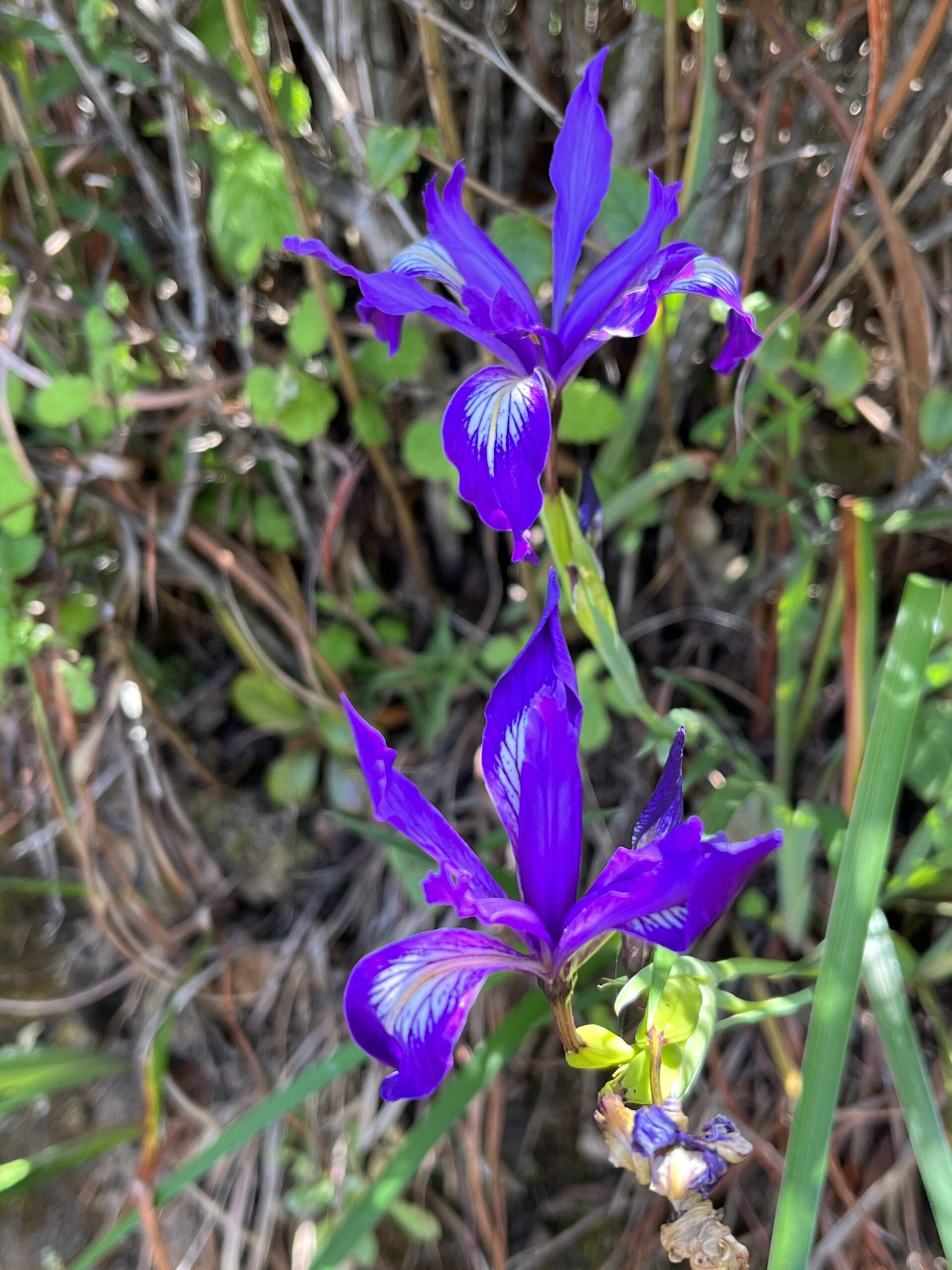 The 2 mile Valley View Trail (including the return along the Weiler Ranch Trail) presents hikers with a vivid perspective of the park’s different micro-climates. The trail traverses a south-facing ridge that parallels the valley. South-facing slopes receive more direct sunlight, creating a micro-climate that is warmer and drier than north-facing slopes. This results in a dramatic contrast in plant communities between the two slopes. The Valley View will take you through open grasslands dotted with native shrubs like Coyote Brush and California Sagebrush. Due to extensive grazing in the past, introduced European grass species like Rattlesnake Grass and Wild Oats often dominate these grasslands. Trees are more rare, and other than a few groves of introduced Australian Eucalyptus, the tallest shrub/tree is the scattered Christmas Berry or Toyon, with profuse displays of white flowers in late summer that transform into red berries by early winter. In early Spring, the top of the Valley View treats hikers to the parks most beautiful and extensive displays of wild Iris.

Looking south from the trail down into the valley, hikers view a ribbon of Arroyo Willow, marking the meanders of San Pedro Valley Creek, with an occasional Red Alder poking above the canopy. Looking across to the northfacing slope (traversed by the Hazelnut Trail) you see a dense covering of shrubs and trees and no grasslands. The moist ravines, typically draining the water table, are filled with willow, elderberry and dogwood. The ridge tops are dominated by groves of Chinquapin, whose bright green leaves with golden undersides present a distinctive, easily recognized golden-green hue. The remaining dense shrubbery of the north-facing slope is dominated by hazelnut, huckleberry, cream bush, coffeeberry and silk tassel.

The warmth of the south-facing slope makes the unshaded Valley View trail the best place to observe the park’s reptiles.

Western fence lizards and Alligator lizards are commonly seen as well as Gopher snakes and an uncommon Rubber Boa. Other cold-blooded invertebrates also prefer the warmth of this south-facing slope. Tarantulas inhabit the park but remain in their burrows during the day, and so are rarely observed. But a large black wasp with bright orange wings known as the Tarantula Hawk, is a definitive indicator of the spider’s presence. To reproduce Tarantula Hawks must find a tarantula, sting and paralyze it. They then the wasp drags the spider into a burrow and lays an egg that will hatch and feed on then tarantula.

A few benches are provided along the trail. These not only provide a good resting spot, but are excellent perches from which to observe the contrasting north-facing slope, as well as the valley floor. Grazing deer are frequently seen in the valley, as well as the occasional bobcat patiently waiting at a gopher hole. Often the north-facing slope is covered in fog. Driven inland from the south but unable to reach the Valley View trail, it remains sunlit. There is something wonderfully ethereal about watching a creamy white blanket of fog roll over the opposing ridge, and then ooze down the ravines to the valley floor.

Throughout the year you will hear the sounds of the Wrentit, Spotted Towhee, and Scrub Jays. The long curve-billed of the California Thrasher easily identifies this year long resident, but it is seldom seen. Nonetheless its long, raspy mocking-bird like breeding song betrays it whereabouts and they are one of the first birds to announce the approach of spring. Autumn is announced by the songs of the Golden-crowned Sparrows who migrate from their sub-Arctic breeding grounds to overwinter in the milder climate of the California Coast. Another indicator of our mild winters is the ever-present Anna’s Hummingbird. There is a definite rhythm of the seasons that can be seen and heard along the Valley View Trail.