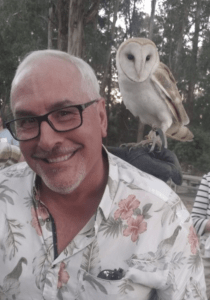 Let’s celebrate the antics and fascinating appearance of critters of our Park and other areas with the renowned Robert Cala’s photography and insight. On Saturday, October 19, at 4pm, Rob will take a 180 degree turn from his last show here, switching from just marine creatures to onland photos—with guaranteed “hummingbird meets water droplets” scenes that he captures on camera, intimate scenes fired up by his need to know who these creatures are, or maybe the joys of being a hummingbird.

Born in Monterey, and raised on the SF Peninsula, he’s been in love with our coast and Bay from the beginning, which led to his job at the Fitzgerald Marine Preserve as Park Ranger and photographer. Rob studied broadcasting & film at CSM, using his skills to produce a film on intertidal life which was chosen for showing at the Thunder Bay International Film Festival & at the SF International Ocean Film Festival. He has published a book of vivid artistic photographs & text.