Join us at 3pm on Saturday, February 15, for Morgan Stickrod’s program on the ecosystems of these craggy islands. In his own words: “A mere 30 miles offshore from the bustling metropolis of San Francisco, the Farallon Islands can seem more wild and remote than some of North America’s most geographically isolated wilderness areas. 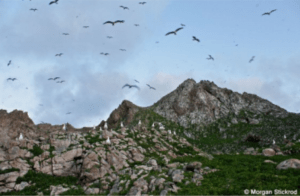 Jagged granitic spires that share an orogenic history with the distant mammoth peaks of the Sierras, sit draped in a seemingly perpetual cloak of fog amidst a ceaseless onslaught from the surrounding turbulent oceanic waters.” (Above, Morgan’s photo of Farallones)
The cold, nutrient-rich waters surrounding the Farallon chain support great offerings in marine habitat and diversity of wildlife. These islands are arguably the most important area for nesting seabirds within the contiguous U.S; upwards of 300,000 can be observed nesting on the rocky  islands from late spring to early summer. Small in size, and “exposed to myriad environmental stresses & disturbance”, only 25 species of native plants exist here.
Yet, the native flora like seaside goldfields at left have found a niche in the “nutrient-poor, guano-encrusted barrens of the islands” and have a mighty story to tell.

Closed & inaccessible to the public, the islands have always held an “aura of mystique & foreboding”. This talk will explore the natural history of the Farallones, from birds and pinnipeds relying on these rocky havens for winter breeding grounds, to the fascinating interactions between the flora and fauna of the islands. Morgan will explore the role of humans in the mix  from egg & fur poachers at the end of the 19th century & on through the continued dedicated management of the island by a revolving but small group of scientists.

Morgan is a graduate student at SFSU, investigating seed banks & vegetation dynamics of a brackish tidal marsh in Solano Co. He has worked at the SF Botanical Garden for nearly 3 years. But prior to this existence he was in theSouthern Appalachians, working for the Blue Ridge Parkway, developing the herbarium collection and doing rare plant management. He was also involved in several long-term research projects in Great Smoky Mountains NP studying potential resistance in 2 species of hemlock to the Hemlock Wooly Adelgid.

And, though born in San Francisco, he received his BS in Ecology from the University of North Carolina.